After recovering from my action-packed tracks weekend, Monday took me to a local dog shelter. It took some charades with our Uber driver to get to the right place, but once we found the entrance, our little group spent time playing with the dogs. Deb quickly found herself in a pile of puppies as soon as she leaned down to pet one! After seeing the setup of the shelter, a quick downpour had us sprinting to the office for cover. A few brave souls ventured out to grab the dog food, treats and toys we had brought to donate so they wouldn’t get drenched!

When the rain let up, the group journeyed back to WiP to start their workday while Ahi and I stayed behind to speak with the owner, Zoni, about where his organization could use our help. As one of our PI initiatives, I was excited to see what projects we could kick start to hand off to the next RY group. We covered everything from photo shoots, to beach days, fundraising and website updates, giving us a lot to chew on for the remainder of the month. Luckily, I was able to get a few things organized for a clean handoff to Kanyini, the next RY group visiting Split, and they managed a number of successful events!

Following the shelter, I put in a few good hours of work before hitting the beach with John for a deep-water swim.  Now prune-y and sun-soaked, it was back to the office, with my final day of work quickly approaching. I spent the week wrapping up my last projects and finalizing my transition with the new owner of my role. While it was sad to be leaving behind my hard work and achievements from the past few years, we had a smooth, fun transition – I only wish I had more opportunity to work with my successor! 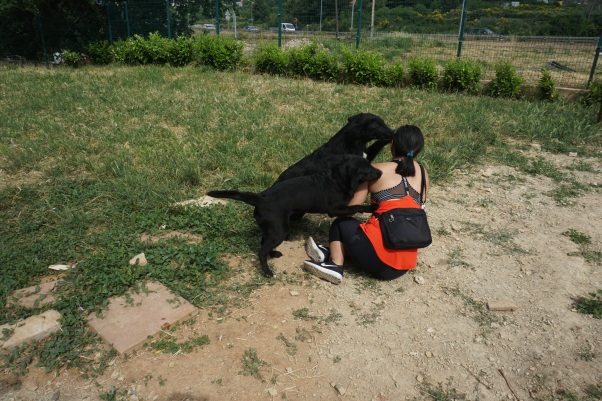 The dog shelter was just the start of a busy week for PI. The RY group Yugen spent a good portion of their year organizing Yugen Build, setting fundraising goals to support the build of 58 new homes in Bogota, Colombia. To help with their fundraising, Yugen created a strong competition between the RY communities by offering prizes to the three groups who raised the most money.

Of course, my competitive spirit kicked in and I pulled together a coordinated social media drop for donations in addition to the events we already had planned within the group. We were hopeful to hit second or third place, but at the end of it all, came in fourth.

Thursday we got to paint. About 10 of us went to a home for people with disabilities to finish painting a hallway that had been started the prior week by other members of Kairos. I’m proud to say we were effective in our taping abilities (until we ran out of tape) and efficient in getting to the end of the hallway. Most of the paint made it on the walls instead of us, however Kirsten may disagree…

With most of my week focused on the transition from work & PI initiatives, I still made time to explore Old Town in search of a dress for my cousin’s upcoming wedding. While I failed on finding a dress, it was nice to explore a bit on my own. Then it was time to pack for a short trip across the pond to join in the wedding celebrations.

One thing you learn quickly on RY is that mule-ing is the best way to get things to or from home. I took my orders and was off to the airport for a day full of airplane movies. Lesson two – how to manage jet lag!

After a quick stop in Munich and five or so movies later, I touched down in Chicago. I’d only been gone three weeks and couldn’t believe I was already back where I started. I hopped in a cab back to my parents’ house and worked on switching out SIM cards to keep up communications around the world. I was happy to find a few US dollars in my bag to tip, and after saying thank you in Croatian (oops!), walked in to see my mom and a pile of stuff to mule back to Europe. (Thanks for filling orders, Mom!)

Mom and I quickly tackled our first wedding dilemma – what to wear! After raiding all the closets and trying on way too many dresses, we packed up the car (yes, with everything we had tried on) and drove on up to Wisconsin for pre-wedding dinner & drinks at the yacht club. It was the perfect way to keep me awake late enough to survive the weekend.

After crashing for a full night’s sleep, I tackled a few last minute needs before the afternoon wedding. First off, I was stateside which of course called for Starbucks! I also couldn’t go to a wedding without a fresh mani/pedi, so I dragged mom along to get her nails done. After some easy banter with our manicurists, we had a quick lunch and got ready for the ceremony, again debating dresses until we settled on the best two. My cousin Heather came by as I was finishing up my makeup, giving us a chance to catch-up before seeing the rest of the family. 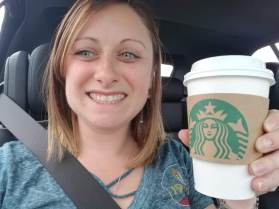 You could feel the excitement when we arrived at the church. We took the required family selfies as we waited for the ceremony to begin. Julie (mother of the bride) looked fabulous as she entered the church, and Luke (Canadian groom) was beaming as he waited to see his bride. Annie looked beautiful as she entered with Kent (father of the bride) and gracefully made her way down the aisle.  (Anyone who knows Annie is aware of how impressive this is!)

As the ceremony progressed, it became clear that this would be the most entertaining wedding I had been to in a while. Watching the facial expressions of the soon to be married couple kept us holding in our laughter. After the vows were complete, there was some confusion up front – does he get to kiss the bride?! After sneaking in a kiss, the ceremony came to a close and we congratulated the happy couple and their families in a receiving line. We went back to the house to catch-up over some wine before making our way to the reception.

The reception did not disappoint! They did an absolutely fabulous job of making over the lakeside area. I don’t have enough words to describe the event, but the food was delicious and the ambiance was perfect. Kent poured his heart out to Julie before giving Luke a user guide on how to handle Haeger women, complete with pro tips on each troubleshooting situation. Quick disclaimer: Annie is a newer model, and therefore may not provide the same outcome. KC and Will (brothers of the bride) gave a highly entertaining speech, including reminiscing on the cult of the dog Annie created in grade school! What a leader she is…

Dinner was served, and following a sparkler line, it was off to the dance floor! The live band played a great set, but I skipped out on the dancing. Instead, I met a bunch of Canadian sailors at the bar and embarked on a lively political debate! If you have the chance to talk US politics with a bunch of drunk Canadians, I’d say go for it. We had an extremely entertaining talk on all sides of the issues while sharing many rounds of drinks. After closing down the party, it was off to Lindy’s for a final round at the bar before heading to bed. Yeah…sailors can drink!! 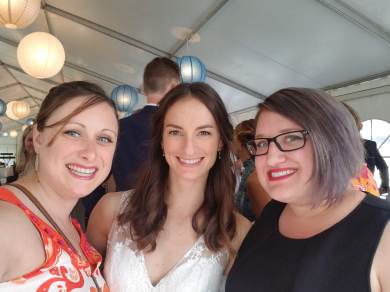 Sunday held a quick trip to Walmart (gotta love Wisconsin) to stock up in my final mule-ing requests. I stopped back at the Haeger’s for family brunch before saying goodbye to all my relatives. Mom and I headed back to Winnetka to grab dinner with Grandma Ro, Zanna sleeping on my lap for the 90 minute ride. Monday was a day to relax and pack before going to puppy school with Zanna.  She had one more week before her final test to graduate and I have to say, I wasn’t too sure if she’d make it! Don’t worry, she passed.

After a whirlwind of a weekend in a different time zone, language and currency, I was ready to get on the plane back to the Kairos crew.